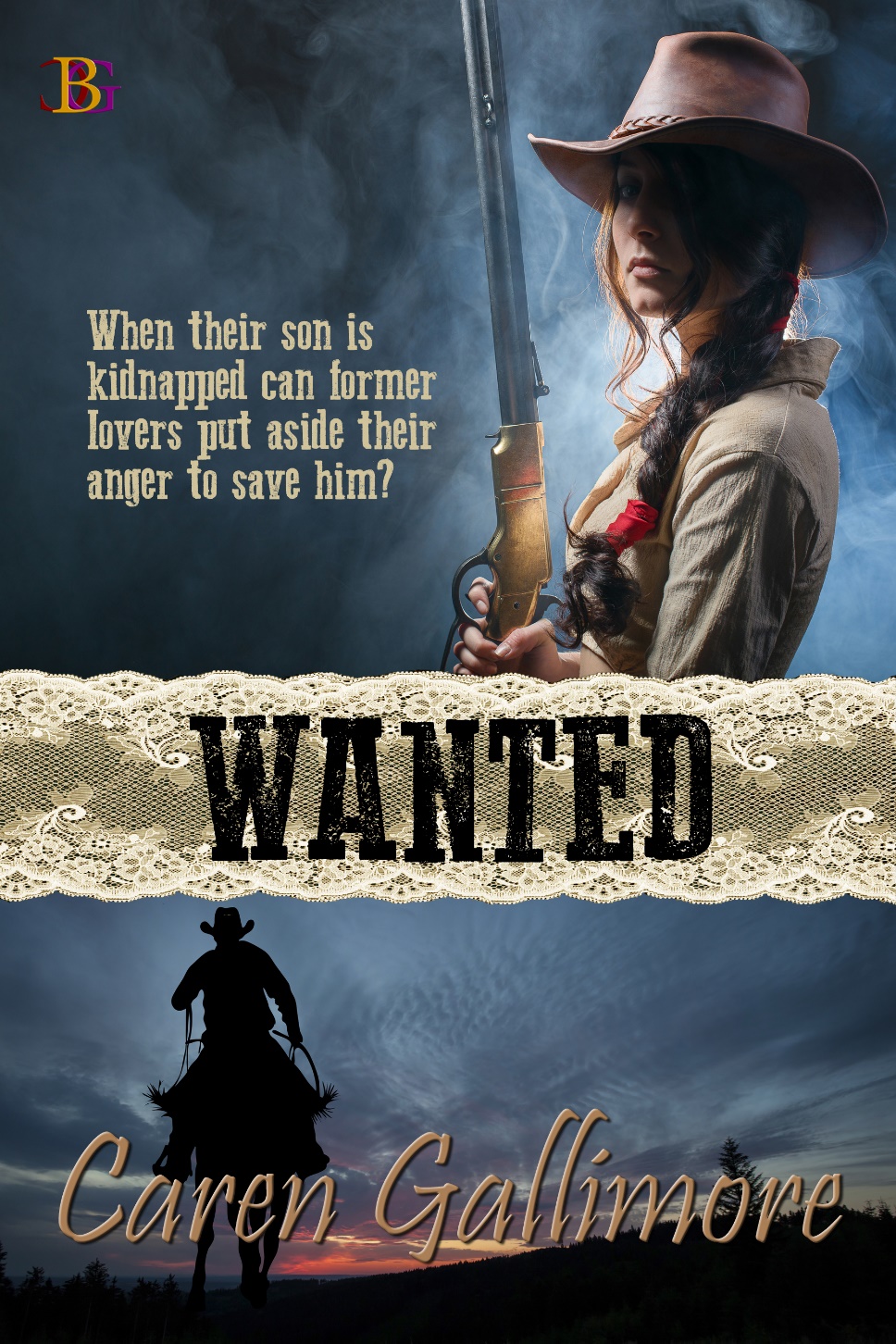 Caitlyn Daniels didn’t plan to fall in love, least of all with an outlaw. Life was too exciting to waste it on domesticities.

However, when Dakota Cabe rode into town, she lost her heart to him. His reputation, which left most women in need of smelling salts, didn’t deter her; she saw the man beneath the tough façade of a hard-hearted desperado. When the sheriff forced him out of town, she was devastated. She understood his reasons to protect her from bounty hunters, but she’d rather live on the run than without him. But he didn’t ask, and she didn’t tell him she was pregnant. Her pride wouldn’t allow her.

Eighteen months later, John Wakefield, a vindictive outlaw, kidnaps her son and her friend. Her pride was meaningless. She’d make a deal with the devil if that could change things.

Alone, but not without skills of her own, she rides out after John Wakefield and his gang.

In her desperate pursuit to rescue her son, she collides with Dakota, surprisingly on the same mission. She needs a man as cold, brutal, and cunning as the man who has her son; she needs Dakota Cabe. And she wasn’t too proud to beg if necessary, but she didn’t have to.

Former lovers, now daring desperados they put their past aside to save their son. Together they confront vicious outlaws; friends turned enemies and an unruly love neither of them can deny nor control.

Caitlyn prepared to make another dreaded excursion into town. She examined her small wardrobe and selected one of her few dresses.

“This is pure vanity.” She held the vivid coral dress under her chin and rolled her eyes at her image in the mirror. Batting her eyelashes for effect, she laughed. “No, now you look silly.”

A sigh slipped through her lips. “Though, talking to oneself may be worse.”

She tossed the dress to the bed. No point fighting herself. Her riding attire was practical for going into town, but perhaps a smaller revolver. A derringer? She snorted. It was unlikely she could hit a barn with that useless gun unless she was within two feet tof the building.

Picking up her revolver, she tucked the gun into the back of her riding skirt. Easy to reach and not obtrusive. She gave herself another quick assessment in the mirror and nodded. It would do. She’d wasted enough time. The sooner she got to town, the quicker she’d be back to help with chores.

The ride into town she took at a comfortable clip, enjoying the fresh air against her face. Entering the town limits, she slowed to an unhurried pace, riding with both reins held high, just like a lady.

“Oh bother.” Mrs. Clark’s opinion of her wasn’t something she could change.

Caitlyn leaned over the withers of her horse and moved her foot from the stirrup to examine the old saddle cinch. It should have been fixed long before now.

“I hope I’m not your source of amusement.”

A man’s deep voice and unexpected appearance caused her to jerk and almost kick Star into a bolt. Her cheeks heated.

The strange cattleman from the roundup had caught her unaware and laughing.

“Sir, I can assure you that you are not in the least bit funny.” She straightened her posture and drew back her shoulders. Now she wished she had worn a dress and sat in a sidesaddle. Well, perhaps not a sidesaddle since the cinch was the primary reason for her trip.

“My apologies, ma’am. Good day.” He tipped his large Stetson. His cool, steel gray eyes fastened on hers, but a flicker of warmth sparked.

“Good day to you, sir.” Adjusting to a more ladylike stance, she assumed an aristocratic air. The end of her gun pinched her in the fanny, and she winced. She urged Star forward then realized she had passed her intended destination, the blacksmith shop. Her shoulders drooped.

Her obliviousness to her surroundings disturbed her. It was the man. He had distracted her with his-his…damn, it was the man himself. She brought Star to a halt and backed up.

She dipped her chin to the man leaning against the stable wall, his gaze still upon her, she added, “I was coming to the livery today.”

He smiled and pushed against the wall to stand straighter.

She flicked a spot of dust from her collar and waited.

“Actually, I had a late start.” Why on earth do I need to explain myself to this man?

“That can work against you.”

Oh, for the love of God, Caitlyn, do not say another word to him. “My saddle strap needs to be replaced.” With a slap, she placed one gloved hand across her mouth in case it continued to talk without her brain engaged.

His gaze broke from hers and traveled down to the saddle strap. “You’re lucky you made it this far.” He lifted his head and assessed her with a warm familiarity.

Shifting in her saddle, she inspected the thin, worn leather. Indeed it had been luck.

“Yes, but there were other things more pressing to tend to.” She dusted at an invisible spot on her saddle horn.

“Your safety should be the most pressing,” he said.

She had nothing to offer back. It was as clear to her as it had been to Mrs. Clark, she didn’t have a feminine bone in her body. “Oh, well, thank you. I think.” Why didn’t he move out of the way?

“I’m helping Sam today, while I wait for another roundup.”

“Of course.” Sam. “Well then, I guess you’re the man I’m wanting.” Did she just say that? She stared straight at him and fought the heat smoldering at her collarbone.

“Yes, ma’am. I am.” He smiled, his eyes sparkling with a mischievous inner fire. He stepped forward, took the reins from her hands, then walked her horse into the barn. “Name’s Dakota Cabe.”

He paused, gave her another quick inspection and resumed his lead.

She might as well be naked in the saddle, but she nodded.

Entering the livery, she started to dismount, but the leather strap gave way. She struggled to free herself from the bootstrap and keep her horse under control, but without the reins, she couldn’t.

He did, both Caitlyn and her saddle.

For a moment, she couldn’t react. Cabe’s strength alarmed and disoriented her. She’d never been this close to a man before, or this helpless to extract herself from an unexpected situation. His arm tightened around her waist, and he plucked her free from the startled horse.

“Shhh—easy girl,” he whispered to her mare. Removing a knife from his boot, he cut the remaining strap.

Star calmed immediately, and Caitlyn removed herself from the seat and his grip.

“Thank you, Mr. Cabe.” She adjusted her vest back into place to cover her gun.

“When will you be back for your horse and saddle?” Placing the seat on the wall of the stall, he faced her.

“I’ll need my horse before dark, and my saddle too if that gives you enough time. If not, I’ll come back tomorrow for my saddle.”

“Do you live far from town?”

A moment passed, she wondered at his question but didn’t answer.

He held her scrutiny. “Only wondering how’d you get home if I didn’t finish the saddle.”

“By horseback, Mr. Cabe.” Was the man dense?

Ah, so he wondered what kind of woman rides without a saddle. Mrs. Clark would have a quick response. Caitlyn took in a deep breath and let it out. It was pointless to pretend to be the lady she wasn’t.

He smiled. “I thought so. I’ll have it ready.” He untied the small purse she had secured around her saddle horn and handed it to her.

She started to leave and peeked back at him. He was still smiling.

Hang out at the campfire:

We use cookies on our website to give you the most relevant experience by remembering your preferences and repeat visits. By clicking “Accept”, you consent to the use of ALL the cookies.
.
Cookie SettingsAccept
Manage consent

This website uses cookies to improve your experience while you navigate through the website. Out of these, the cookies that are categorized as necessary are stored on your browser as they are essential for the working of basic functionalities of the website. We also use third-party cookies that help us analyze and understand how you use this website. These cookies will be stored in your browser only with your consent. You also have the option to opt-out of these cookies. But opting out of some of these cookies may affect your browsing experience.
Necessary Always Enabled
Necessary cookies are absolutely essential for the website to function properly. These cookies ensure basic functionalities and security features of the website, anonymously.
Functional
Functional cookies help to perform certain functionalities like sharing the content of the website on social media platforms, collect feedbacks, and other third-party features.
Performance
Performance cookies are used to understand and analyze the key performance indexes of the website which helps in delivering a better user experience for the visitors.
Analytics
Analytical cookies are used to understand how visitors interact with the website. These cookies help provide information on metrics the number of visitors, bounce rate, traffic source, etc.
Advertisement
Advertisement cookies are used to provide visitors with relevant ads and marketing campaigns. These cookies track visitors across websites and collect information to provide customized ads.
Others
Other uncategorized cookies are those that are being analyzed and have not been classified into a category as yet.
SAVE & ACCEPT
Powered by